Did you know that you can set up the PhotoModeler 3D Viewer to display your model as a 3D stereo view for use with 3D glasses? It’s a neat to way to visualize your model by increasing the perception of depth, and it’s simple to set up in PhotoModeler.

PhotoModeler uses the red/blue style of 3D glasses. Technically the term for this is an anaglyph image and is explained in more detail here.

You’ve probably seen the classic red/blue effect in movies or still images that, when wearing the appropriate red/blue 3D glasses, cause the image to pop out of the screen and accentuate the 3D illusion.  Modern movies use a polarizing effect for 3D glasses but that is harder to achieve with a computer screen.  Inexpensive 3D eye wear can be purchased online.

If you have some 3D glasses lying around, check out this example image taken on NASA’s Mars Pathfinder mission showing Martian terrain in 3D relief (click to enlarge): 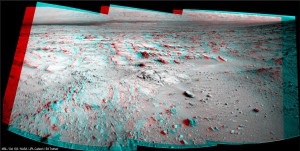 Once you have a model built up in PhotoModeler, you can simply turn on the 3D stereo feature and set the offset in the 3D Viewer Options dialog: 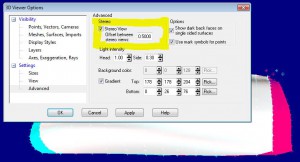 You may need to experiment with the offset setting and adjust for your glasses and/or distance to screen for optimal effect.  Here’s the 3D Viewer showing the anaglyph feature for one of the PhotoModeler coded target tutorial projects: 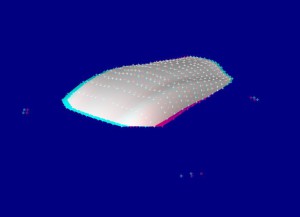 In PhotoModeler you can manipulate the viewer to spin/pan/zoom the display to really see the object pop out of the screen!