There have been some very interesting developments with PhotoModeler Scanner. This tip video shows a new example done with these improvements.

A new beta release of the product brings four new capabilities and improvements:

With these improvements, advanced scanning and production of 3d point clouds is more automated, more accurate, with higher detail, and capable of working with a wider range of calibrated or uncalibrated image sources.

Producing 360 degree point clouds with a laser scanner requires a number of instrument moves and setups. Then the scanner software has to be capable of accurately merging the various point clouds together. With photogrammetry, you can take your digital camera to the scene, take a bunch of photos and return to the comfort of the office to complete the work. Completing full scans with high detail is now much easier.

The tip video uses a tree trunk as an example of a 360 degree scan. The project had 49 photos and produced a mesh of 500 thousand triangles. Time to process was 39 minutes- start to finish.

As well as 360 degree scans, 2.5D objects scan well too. Here is a simple project of a sheet of paper towel – 19 photos and 300 thousand triangles. 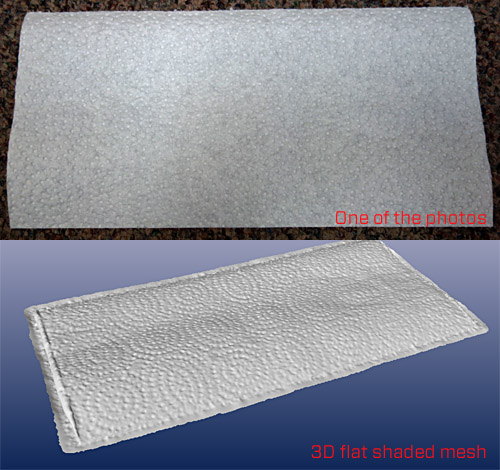 Modern digital cameras can be very high resolution and at reasonable cost. The paper towel project was done with a Sony RX100 listing around $600usd. It is a 20 Mpixel camera with a good size imaging chip (1″ cmos). The lens is a good quality zoom (Zeiss) – and while you could choose an even more suitable camera if you are doing very high accuracy surveys with photogrammetry, it is more than up to the task here!

The examples shown here were done with PhotoModeler Scanner 2013.1 Beta 2. The final 2014.0 release with all these new features will be released early in 2014, available at no cost to all recent new Scanner and Motion license owners (12 months prior), and also to all licensees with an active maintenance subscription.

Watch the Youtube video to see the easy process of producing a detailed 360 degree 3D scan with just a few button presses.