Modeling an Inukshuk with an iPhone in PhotoModeler 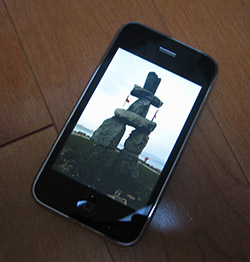 Since Eos Systems, the developer of PhotoModeler, is located in Vancouver, BC – the home of the 2010 Winter Olympics, what better project to carry out than to model the iconic Inukshuk (the symbol of the Winter Games).

Inukshuk are native Inuit statues made of large stacked rocks. They are stone landmarks used for navigation, or markers for hunting grounds or food caches. Vancouver has a large Inukshuk on the shores of English Bay that many say was one of the inspirations for the games logo.

Is the camera in an iPhone 3GS good enough to do photogrammetric modeling? It is indeed!

The iPhone camera does not have high resolution (being 3 MPixels) but it has a fixed lens (no zoom) and it is pretty good quality overall.We used an iPhone 3GS to take a number of photographs around the statue. The biggest issue we had with photography was waiting for the various groups of city visitors to take their own photos!

The photos were loaded into PhotoModeler Scanner, marked for key points and oriented (PhotoModeler figures out where the iPhone was at the time of each exposure). Then the DSM (dense surface modeling) algorithm was run on the photos to produce dense point clouds – like a laser scan would do but all correctly tied together. PhotoModeler Scanner merges the clouds and you get something like this:

The colors of each scan dot are pulled automatically from the photographs – that is why even in point cloud form the model looks so realistic.

As you can see the iPhone makes a reasonable photogrammetric camera. It is convenient because you have it with you always. While this is a PhotoModeler Scanner project we have also completed standard PhotoModeler projects with the iPhone.

Would we choose the iPhone if we had ready access to a high resolution digital SLR camera instead? No, the high quality camera will give you better results (more detail and higher accuracy) but if all you have is your iPhone, don’t hesitate to use it to photograph your scene or object – for modeling in PhotoModeler or PhotoModeler Scanner.