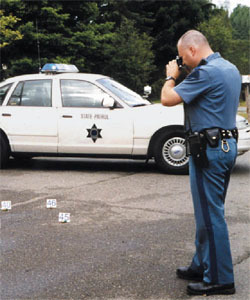 A camera is a very common piece of equipment for an officer in investigations, ident, forensics, and reconstruction. The same goes for forensic engineers in private and public practice.  We are even seeing cameras in every day public safety use such as body-worn cameras, and cruiser dash-cams. Your camera can do so much more than just take photos! You can use these cameras as accurate measuring and diagramming tools.  The technology is called ‘photogrammetry’.

‘Photogrammetry’ comes from ‘photogra’, short for photography, and ‘metry’, short for measurement. Photogrammetry is the science of making measurements of the real world using photographs.  Increasingly, public safety / law enforcement departments and forensic engineers from all over the world are using photogrammetry. It is used to extract key measurements and diagrams in crime and accident reconstruction tasks. Read further to see if photogrammetry is something that will help you with your work, efficiency, cost effectiveness, and improved officer safety.

There are two types of photogrammetry in public safety use:  a) ground-based, and b) drone/UAV-based. While ground-based is used more with crime scenes, indoor scenes, and some accident scenes, UAV-based is becoming more prevalent with larger traffic accident scenes. It is best that the photogrammetry software being used by enforcement agencies is designed to handle both cases well (as the PhotoModeler product does). There are projects also where a combination of ground-based photography and drone photography is needed.

There are several uses for photogrammetry in public safety and forensics:

Sections below introduce each of these with links to further readings.

Collision incidents involving multiple vehicles and that close roads, or incidents that involve fatalities usually require an extra level of scene documentation. The attending officer with the camera can take photographs in a way to allow for accurate measurements and diagraming back at the office. This method helps with skid and yaw mark diagramming, finding final resting positions, and placement of key evidence. In addition, photogrammetry can assist with vehicle crush measurements. 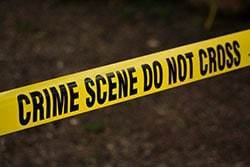 Measurements and diagrams are often critical parts of a crime scene investigation. First responders are asked to not move evidence, so it may be diagrammed first. A camera is a great way to do this quickly.

Increasingly officers and police cruisers are equipped with cameras. While these cameras tend to be of low image quality, the images from them can still be used to extract key measurements. They are worth more than just their video and visual recording capabilities. See examples in article below on how body-worn cameras can be used. Also dash cams can be used to compute speed in many cases. 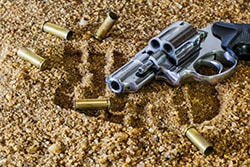 A unique application of photogrammetry is to use a camera to measure the positions and angles of trajectory rods placed in bullet holes relative to the room or scene. This can help determine shooter position. There is potential for this with blood splatter as well.

Sometimes the only evidence available in a cold case is a photograph (or two). Sometimes key measurement and placement data can be extracted from those photos to help with the case investigation.

If you are going to use a technology in reconstruction and forensics, it is critical that the technology be court accepted. While only a small percent of your cases end up in court, it is good to know that the systems and technology you used to measure and diagram the crime or accident scene is accepted by that court.  PhotoModeler has been well accepted by the courts. Court acceptance often depends on peer reviewed articles as well, such as these SAE papers.

PhotoModeler was first created by Alan Walford in the early 1990’s. Its first release was in 1993 and the very first customer was a forensic specialist! PhotoModeler is now used all over the world. There is a long successful history with PhotoModeler in police and public safety work (among other applications in engineering, surveying, etc.).

Training courses are available on site or are held regularly across the USA. Contact us to find out the training schedule, or to ask any questions on how photogrammetry and PhotoModeler might fit into your department.