Why My Deck Templates Measured in PhotoModeler Might Not Fit

This document discusses possible accuracy issues with marine deck measurement projects, and why a manufactured deck piece may not fit.

The best way to get good results in PhotoModeler is to set up the projects well, with plenty of photo overlap, good camera angles (a mix of top-down and angled), and a reasonable number and spread of targets in each photo. When the coordinate system is set up (including multiple accurate scales), the resulting model will be accurate, and the manufactured decking will fit well.

Digital templates are exported from PhotoModeler for use in CAD or other printing/cutting software. Make sure the model is correct within PhotoModeler before exporting or producing any final products to avoid wasted material.

This document explains how to assess a project’s accuracy, and describes the most common sources of inaccuracy and alignment problems in boat deck measurement projects.

Note this document assumes the reader is familiar with the standard PhotoModeler approach for deck modeling and measurement as described in other documents and videos.

This guide is intended for those working with PhotoModeler on boat deck measurement projects that are encountering accuracy and fit issues. It describes:

The main reasons for poor fit are:

There are several metrics that can be used to assess a project’s accuracy. If any of these indicate problems, you will need to understand why – and the ‘Main Reasons…’ section below should help. 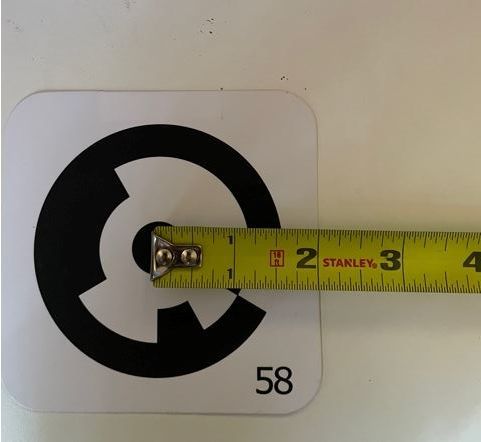 The most common reasons for a fit problem are described in this section.

An incorrect Surface was used in drawing

If the plane surface defined in PhotoModeler does not match the actual deck surface (too high or at a wrong angle), you will usually see projected 3D surface draw alignment issues in other photos, especially in photos taken at a lower angle.

Make sure to define plane surfaces using the target points on or near the panel being traced. Defining multiple plane surfaces (e.g., one per decking panel) is advisable, especially when the deck surface is not that flat. If the surface draw is assigned to the wrong surface, you can reassign using the setting on Surface Draw properties as shown here.

If the defined scale(s) are not accurate, the model may appear OK in PhotoModeler, but the output and manufactured panels will not align well – the panels may be over or under-sized.

It is critical that the scales match the actual distances between the point pairs. Use a precise measuring device and measure twice when setting up scales!

To scale a PhotoModeler project make sure to:

The Appendix goes into more detail on scale issues in PhotoModeler.

Long and narrow models often have weak geometry which will be harder for PhotoModeler to process. Examples on a boat are narrow side paths or gunwales. Possible issues with these are: a) photos are taken in a line down a narrow path that only overlap with adjacent photos, b) targets take up a relatively small portion of the photo frame (poor coverage), c) targets are in a line, and d) there are no ‘overview’ photos capturing larger portions of the scene (there is no 'cross bracing' or other support/connection between the photos).

This page talks about problems with photo orientation due to issues like poor target layout.

Try to lay out targets so that at least 15 targets appear in each photo, with good spread.

Instead of just a narrow row of targets down the section, also place some targets on the deck beside it. If need be, place targets on parts of the boat that won’t be modeled for decking, to increase spread and connectivity between sections.

Also, try to tie both ends of long narrow sections of the deck with other parts so that rather than a long “I” or “U” shape, an “O” shape is formed by the targets.

See Targets and Photography Tutorial Video (at 1:30) - from which the image was taken.

Photos that do not overlap much can contribute to model weakness because this limits the number of point ‘references’. Plenty of photo overlap gives PhotoModeler good mathematical redundancy and strong geometry to solve 3D point positions.

Try to take photos so that each point appears on at least three, and ideally more photos. Reduce the distance taken between photos.

Also take angled and overview shots to capture large sections of the deck to help tie the scene together (a camera mounted on a pole can be used for wide overview shots).

Occasionally projects will not fully orient due to a camera calibration issue. If there is good point coverage and good photo overlap and the project otherwise looks properly set up, the camera and its calibration may be to blame. A camera calibration defines the camera’s focal length, and lens distortion, etc.

For example, newer mobile phone cameras have built-in optical image stabilization (OIS), and usually this cannot be disabled. OIS inherently destabilizes the camera lens which makes it difficult to calibrate because the lens shifts when the camera moves.

If a project seems like it meets all requirements, but accuracy is still low, it can be sent to PhotoModeler Tech Support for a review. In PhotoModeler, use the 'Send Files to Support' tool (click File, Help, Send Files...).

APPENDIX A – An In-depth Look at Scaling

A photogrammetry project needs external scale input to provide absolute (vs relative) measurement. Multiple scale inputs help average out the errors and can help identify correctable errors. Only some scale errors are detectable and correctable within PhotoModeler.

Why External Scale is Needed

When PhotoModeler solves a project, it does so in a relative fashion. That is, everything is correct proportionally, but no real-world size is known. For example, the relative solution means that we know a box is half as high as it is wide, but we do not know the actual height in inches. Another example is that a PhotoModeler project of a car could be of a toy car, or of a full-sized car and it would look the same. To have the project match a real-world size, a scale is needed.

The scale is a known distance between two of the project’s points.

To help illustrate how scale work, imagine you have a 12-inch-long flat metal bar placed in the scene before the photos are taken.

If a single scale is used the project will match that one scale precisely.

Scales will not be perfect though. There are three main sources of scale error:

All three sources of error can cause issues with your final project size and fit.

How do we detect or compensate for these errors?

The problem with only using one scale is this: if the scale is wrong, there is no way to know your project is the wrong size. If you had accidently entered a value of 11 inches for the scale, the project would be smaller than the real world. Or, if you had used the wrong bar and it was 6 inches long, but you entered a scale of 12 inches, the project would be two times bigger than the real world.

To help avoid issues like this we recommend using more than one scale. These scales can then be checked against each other, and an average of the scales can be applied to the project.

For example, here are distances that PhotoModeler computed between five pairs of scale points and their deltas.

The absolute and relative sizes of the deltas can tell you something about how good the scales are or if there are issues.

There are two types of gross scale errors.

The first gross error is hard to detect within PhotoModeler and that is when the scales are consistently wrong due to manufacturing or measurement. This can be detected by external audit only. (e.g., all scale bars are 1 cm too long).

The second gross error can usually be detected and is when just one scale (or a small set of scales) of many is wrong. For example, if one of the five bars had an end broken off, but PhotoModeler was told all five of the scale distances were still 12 inches long, the broken one would have a higher delta than the other four. This is because of the redundancy and the way the four correct scales would out-weigh the one wrong one in the average. It might look like this:

To fix this, first check the marking of the points in the photos for the bar ends. If the marking is wrong, fix it and look at the deltas again.

Then look at the bar in the photos. Does it look broken?  Then you could disable the scale (#5 in this case) in PhotoModeler, as you can see the bar is physically broken.

Averaging Out with No Gross Error

If there is nothing obviously wrong with the scale (not bent, warped, broken, or mismarked) then we usually leave all scales in place and let the averaging account for the imperfections in the measurement process.

For example, imagine the person creating the bars only had a tape measure with ½ inch markings. They measure as closely as they can, but they can’t always guarantee all the bars are exactly 12 inches long. This means when you tell PhotoModeler all of them are 12 inches, there will be some variation and the deltas will all vary a bit.

Let’s say that four bars are very close to 12 inches long, and one bar is 12 ¼ inches long due to manufacturing variation. All scales are entered at 12 inches because that is the best they could be measured with that tape measure. None of the computed deltas would be zero (due to averaging and other imperfections), and one scale delta might be a bit bigger. The overall project scale is good, and you would not disable any scales even though one of them had a slightly higher delta value than the others. There is nothing obviously wrong with the scales, so you keep them all and let the averaging take care of it. The resulting project will still be good.

Lastly, let's take the opposite case. For the true bar lengths, only one is very close to 12 inches and the other four are all closer to 12 ½ inches. We still enter 12 inches as the scale for all (as that was the information given us). You can see the scale of the project will all be skewed but again you won’t be able to tell there is an error and we leave them all in place. The project scale will now be off a bit and your fit may not be great. The way to fix this error (which would be detected by an external audit of some form), is to go back to the original bars and measure them more accurately to determine their true length and use those scales in PhotoModeler instead.