There are two types of scene diagramming possible with PhotoModeler:

On this page we discuss the first, which is using a calibrated camera to document a scene before it has been cleared of vehicles. This process is typically carried out by a police department’s incident team.

The two main benefits of using photogrammetry to document an accident scene are speed and cost.

A complex scene that required accurate measurement was often captured with a surveyor’s total station but this was very time consuming. There is a lot of pressure on law enforcement agencies to reopen roads as soon as possible, but they have a duty to properly document the scene – as that evidence may be needed by a court at a later date. By using their own camera and some evidence markers they can document the scene quickly and accurately, and then reopen the road far faster than if they used other measurement and diagramming techniques.

The reduced cost comes from the low cost and portability of a camera vs a total station. Within a fixed budget, an agency can get more cameras and sets of evidence markers into service vehicles than total stations.

PhotoModeler has a long and successful history in forensics and accident reconstruction, covering many years. PhotoModeler has been used in many court cases, and has successfully passed Daubert and Fryre trials. Please contact our sales team if you need a case list.

See also the Accident Mapping with Drone / UAV page for details on that particular use.

From Photos to 3D Court Presentation

This incident between a GMC pickup and a Saturn at a rural intersection was documented with photographs from a police-owned camera and evidence markers. Not only was a scene diagram created, but an orthophoto was used to check tire mark shape, and some crush measurement was done at the scene (again using PhotoModeler). The photograph shows the scene with the pickup truck in the foreground with skid marks, and the Saturn sedan in the far background on the field. 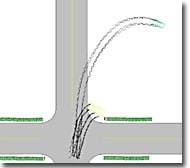 A 2D diagram (Courtesy of DCM Technical Services) was created in CrashZone from the data exported from PhotoModeler. PhotoModeler is a full 3D package but can easily export data projected on a plane for 2D mapping.

An orthophoto of part of the road surface was generated showing the skid marks. One cannot get the true shape of the skid mark in a photograph taken at ground level due to perspective distortion. The rectification and orthophoto function of PhotoModeler creates an output image that removes the perspective distortion – as if the photograph was taken from in the air over the road. The true shape of the skids can be studied in such an image.

The 3D view of the 2D diagram in CrashZone is suitable for court and jury presentation, as some may find it easier to understand.

This incident, which involved fatalities and a major vehicle fire, was photographed from the ground and from an aircraft and then modeled by one of the state police agencies. The image shows one of the aerial photos that was combined into the project.
The image below (at left) shows PhotoModeler with some of the ground photos, and on the right is the resulting scene diagram in CrashZone: